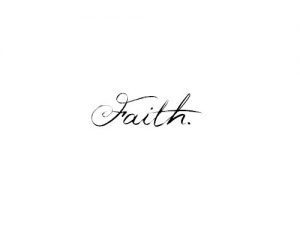 In my own life, I remember very clearly the first love I had for God my savior. I had one desire, to know Him and stay on the path that leads to the full knowledge of and love for God. I clung to the words and promises of my Father in Heaven.  I would read and meditate on them each day from the heart. I believed nothing was impossible with God. My entire being was surrendered and I could not wait to commune with the Lord no matter where I was at and what was going on around me. I waited on God with childlike confidence that He will reveal Himself and work out His will in my life. My heart was His, and my whole day was centered on giving the almighty God his place, yielding my entire life to His service. Every day was a discovery of the Fathers wonderful grace, justice and love.

I am convinced that even without realizing it, we have taken the word “faith” and we have filtered it through the western culture until it has completely lost its original flavor and its lively meaning. In the ancient languages of the eastern, in both the Hebrew and Greek world the word “faith” holds the same forceful meaning of belief, trust, endure, faithful, assurance, affirming, or persuaded. My dear friends, these words convey action – lively action and they require an active force to propel them forward and that force is the Holy Spirit.

In Romans chapter four Paul uses as a perfect example a man named Abraham to show us how this lively, sincere and saving faith in God can bring about God’s divine approval resting on your life.

For what does the Scripture say? “Abraham believed God, and it was counted to him as righteousness.” ~ Romans 4:3

Because Abraham’s faith was alive and active – because Abraham embraced the promise of God with sincerity and confidence – God looked at Abraham with divine approval.

No unbelief made Abraham waver concerning the promise of God, but he grew strong in his faith as he gave glory to God, fully convinced that God was able to do what he had promised. That is why his faith was “counted to him as righteousness.” ~  Romans 4: 20-22

From the first time God spoke the promise to Abraham to the time that Isaac was born were many years. During these years Abraham’s faith grew stronger as he was tried and tested but Abraham did not waver when thoughts of unbelief would at times fill his mind. He rather gave thanks from his deep conviction of belief and yielded his whole heart to God with an active and lively faith that always kept Abraham’s waiting on God, completely at God’s disposal. Friends, time alone will test our faith – being able to rest in waiting on the Father, this will prove if it our believing is sincere and living faith or if it is dead faith.

Now compare this with Zechariah who was the earthly father of John the Baptist. Zechariah was a priest and had a wife named Elizabeth. It tells us in Luke chapter one.

…they had no child, because Elizabeth was barren, and both were advanced in years. ~ Luke 1:7

We see both Abraham, Sarah, Zechariah and Elizabeth were barren of children and advanced in age. See now the difference in Abraham’s sincere and confident faith and Zechariah’s wavering and dead faith.

Zechariah was chosen by lot to enter the temple of the Lord and burn incense. And the whole multitude of the people were praying outside at the hour of incense. And there appeared to him an angel of the Lord standing on the right side of the altar of incense.  And Zechariah was troubled when he saw him, and fear fell upon him.  But the angel said to him, “Do not be afraid, Zechariah, for your prayer has been heard, and your wife Elizabeth will bear you a son, and you shall call his name John.” ~ Luke 1:9

The response of Abraham to Gods word and promise was simply, “Abraham believed God.” and the result of Abraham’s sincere faith was divine approval. Now let’s listen to Zechariah’s response.

And Zechariah said to the angel, “How shall I know this? For I am an old man, and my wife is advanced in years.” ~ Luke 1:18

Zechariah is telling the angel of the living God, how can I perceive, be certain, and comprehend that what you are telling me is the truth? The response from God to Zechariah’s unbelief is classic.

And the angel answered him, “I am Gabriel. I stand in the presence of God, and I was sent to speak to you and to bring you this good news. And behold, you will be silent and unable to speak until the day that these things take place, because you did not believe my words, which will be fulfilled in their time.” ~ Luke 1:19-20

In essence Gabriel was telling Zechariah, “Do you not realize who I am? I stand in the very presence of the living Creator of all things and I was sent specifically to bring you the answer to your prayers and you’re going to question me?!”  Instead of righteousness, God’s divine approval, God put tape over Zechariah’s mouth so that no more unbelief will come forth out of his mouth. For out of the mouth the heart speaks. God is saying to Zechariah, your heart is not right before God. Your faith is not sincere saving faith. You shall not speak one word against my Word or my promise and so Zechariah, stand, wait and watch and you will see that I am Yahweh, who gives life to the dead and calls into existence the things that do not exist!

Have you noticed something as we look back on these times of God dealing with mankind? God in general is not a god of many words. His speech is simple and direct. Why? Because it is truth and there is no reason for God to go into any detail about his character or prove himself worthy. The Word of God has been tested and tried from everlasting to everlasting and found faithful every single time.

May every one of us be persuaded under the deep conviction of how such an almighty God, with His wonderful promises, deserves to be met with a strong, wholehearted, enduring faith in every circumstance of life.