In a world where many ministries are known by the men that lead them please join me in part five of Quiet Servants. I am bringing these stories of mostly unknown men and women who have labored for the Kingdom of God to the forefront so that we all can be encouraged by their faithful duty to God without making a reputation for themselves and their ministry.

Today, we are looking at the life of Father Damien. In 1865 Father Damien was assigned to the Catholic Mission in North Kohala on the island of Hawaiʻi. While Father Damien was serving in several parishes on Oʻahu, the Kingdom of Hawaiʻi was struggling with a labor shortage and a public health crisis, as identified by planters. Many of the parishioners Native Hawaiians had high mortality rates to such Eurasian infectious diseases as smallpox, cholera, influenza, syphilis, and whooping cough, brought to the Hawaiian Islands by foreign traders, sailors and immigrants. Thousands of Hawaiians died of such diseases, to which they had no acquired immunity.

It is believed that Chinese workers carried leprosy (later known as Hansen’s disease) to the islands in the 1830s and 1840s. At that time, leprosy was thought to be highly contagious and incurable. Later the medical community determined that roughly 95% of human beings are immune to it and, in the 20th century, developed effective treatment. In 1865, out of fear of this contagious disease, Hawaiian King Kamehameha IV and the Hawaiian Legislature passed the “Act to Prevent the Spread of Leprosy”. This law quarantined the lepers of Hawaii, requiring the most serious cases to be moved to a settlement colony of Kalawao on the eastern end of the Kalaupapa peninsula on the island of Molokaʻi. Later the settlement of Kalaupapa was developed. Kalawao County, where the two villages are located, is separated from the rest of Molokaʻi by a steep mountain ridge. Even in the 21st century, the only land access is by a mule trail. From 1866 through 1969, a total of about 8,000 Hawaiians were sent to the Kalaupapa peninsula for medical quarantine.

While Bishop Louis Désiré Maigret, the vicar apostolic of the Honolulu diocese, believed that the lepers needed a Catholic priest to assist them, he realized that this assignment had high risk. He did not want to send any one person “in the name of obedience”. After much prayer, four priests volunteered to go, among them Father Damien. The bishop planned for the volunteers to take turns in rotation assisting the inhabitants.

On May 10, 1873, the first volunteer, Father Damien, arrived at the isolated settlement at Kalaupapa, where 816 lepers then lived, and was presented by Bishop Louis Maigret. At his arrival he spoke to the assembled lepers as “one who will be a father to you, and who loves you so much that he does not hesitate to become one of you; to live and die with you”.

Damien worked with them to build a church and establish the Parish of Saint Philomena. In addition to serving as a priest, he dressed residents’ ulcers, built a reservoir, built homes and furniture, made coffins, and dug graves. Six months after his arrival at Kalawao, he wrote to his brother, Pamphile, in Europe: “…I make myself a leper with the lepers to gain all to Jesus Christ.”

During this time, Father Damien had not only cared for the lepers, but also established leadership within the community to improve the state of living. Father Damien aided the colony by teaching, painting houses, organizing farms, organizing the construction of chapels, roads, hospitals, and churches. He also personally dressed residents, dug graves, built coffins, ate food by hand with lepers, shared pipes with them, and lived with the lepers as equals. Father Damien also served as a priest during this time and spread the Catholic Faith to the lepers; it is said that Father Damien told the lepers that despite what the outside world thought of them, they were always precious in the eyes of God. Under the leadership of Father Damien, laws were more strongly enforced, working farms were more organized, and schools along with an education system were established.

Father Damien worked for 16 years in Hawaii providing comfort for the lepers of Kalaupapa. He gave the people not only faith, but also homes and his medical expertise. He would pray at the cemetery of the deceased and comfort the dying at their bedsides.

In December 1884 while preparing to bathe, Damien inadvertently put his foot into scalding water, causing his skin to blister. He felt nothing and realized he had contracted leprosy after 11 years of working in the colony. This was a common way for people to discover that they had been infected with leprosy. Residents said that Damien worked vigorously to build as many homes as he could and planned for the future of programs he had established.

With an arm in a sling, a foot in bandages, and his leg dragging, Damien knew death was near. He was bedridden on 23 March 1889, and on 30 March he made a general confession. Damien died of leprosy at 8:00 a.m. on 15 April 1889, aged 49. The next day, after Mass said by Father Moellers at St. Philomena’s, the whole settlement followed the funeral cortège to the cemetery. Damien was laid to rest under the same pandanus tree where he first slept upon his arrival on Molokaʻi. 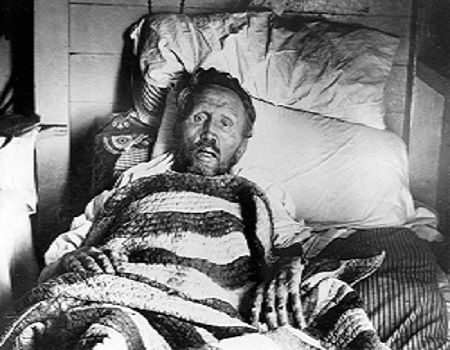 FATHER DAMIEN ON HIS DEATHBED