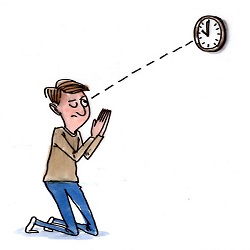 When the people saw that Moses delayed to come down from the mountain, the people gathered themselves together to Aaron and said to him, “Up, make us gods who shall go before us.  ~ Exodus 32:1

Patience is not a natural attribute of the human race whether it is waiting in line or waiting for the return of Jesus. Moses, who was a type of Jesus, was God’s choice to lead the people of God out of the bondage of Egypt and take them through foreign territory to a land that was promised that they would inherit.

At some point God wanted to speak to his people out of the mountain. Stricken with terror, the people beg Moses to excuse them from listening any further to God’s voice and pledge to obey whatever Moses relays to them in God’s name. Moses agrees, assuring them that this is what he and God had in mind all along. Moses reenters the thick cloud covering the mountaintop while the people remain at a distance (Exodus 20:15–18), and the long-awaited giving of the law begins.

Here is where the plan of God is hijacked. Moses was up on the mountain and the people below became more and more impatient. Moses said he would return but where is he?

Typically we human creatures cannot rest or wait in simple faith and trust, so we end up seeking out ways that will manufacture and bring God down to us. So the people go to the Priest Aaron and suggest, “Make us gods who shall go before us.” Aaron, like a good pastor, wanted to please the flock and so he devised a way to give the people something to be excited about. Most of you know the rest of the story, Aaron’s way of bringing God to the people was in the form of a bull that was created out of all the best and exciting materials that was at their disposal. To say that God was not happy in an understatement.  God gets angry, sends Moses back down immediately to the people and Moses walks in on a great celebration complete with laser light show, smoke, rain machine, feasting and dancing. (sarcasm provided by me)

Moses delays his descent long enough to beseech God to forbear with his people, then descends and Moses exclaims , “It is not the sound of shouting for victory, or the sound of the cry of defeat, but the sound of singing that I hear.”  And as soon as he came near the camp and saw the calf and the dancing, Moses’ anger burned hot, and he threw the tablets out of his hands and broke them at the foot of the mountain. He took the calf that they had made and burned it with fire and ground it to powder and scattered it on the water and made the people of Israel drink it. I guess that was Moses way of saying, you made your bed, now sleep in it.  (Exodus 32:7–33:23). At God’s command, Moses makes a new set of tablets and climbs the mountain once more to have them inscribed (Exodus 34:1–4).

Like those in Exodus who were waiting for the return of Moses, and those that have been waiting for the return of Jesus, the people of God in each generation have added a new layer in the attempt to bring God’s presence down to the people in a way that resembles the current culture. Today we have massive amounts of money spent on props, stage presence, church sanctuaries, and worship atmosphere, in an effort to experience something beyond just simple faith and obedience. The greater the shock and awe of the presentation, location or performance, the greater the chances that people are willing to celebrate. There are plenty of Aaron’s who are willing to collect vast sums of money to meet the demands of the current generation to set God or gods in front of us in our journey to the promise land.

Start today and simply follow Jesus in pure devotion of faith without relying on the gimmicks, show or your temporary feelings and allow your faith to simply trust and obey even in the wilderness.

Thus says the Lord: “Stand by the roads, and look, and ask for the ancient paths, where the good way is; and walk in it, and find rest for your souls. But they said, ‘We will not walk in it.’ ~ Jeremiah 6:16

Now these things took place as examples for us, that we might not desire evil as they did. Do not be idolaters as some of them were; as it is written, “The people sat down to eat and drink and rose up to play.” ~ 1 Corinthians 10:6

But I am afraid that as the serpent deceived Eve by his cunning, your thoughts will be led astray from a sincere and pure devotion to Christ. ~ 2 Corinthians 11:3