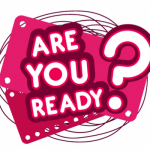 A few weeks ago as I was in prayer I heard five words that took me by surprise. Words spoken by the Holy Spirit to my spirit. Those five words were, “My people are not ready.” The first question would be ready for what?

Back in 1927 Smith Wigglesworth gave a prophetic word that would reinforce what I heard in 2019.

“There must be special preparation for the return of Christ and at least half of all believers will be totally unprepared. We have to see that these days have to come before the Lord can come. There has to be a falling away. I want to speak to you very exactly. All the people which are pressing into and getting ready for this glorious attained place where they shall not be found naked, where they shall be blameless, where they shall be immovable, where they shall be purified by the power of the Word of God, have within them a consciousness of the very presence of God within, changing their very nature and preparing them for a greater thing, and causing them to be ready for translation.

I am old enough to see the slow take over of the culture in the organized church in the last four to five generations. The vast majority of Christ followers in the generation of my great grandparents worked hard yet still found the time to built their life around the church family. They read the Word of God daily, practiced simple devotion to God and neighbor and yet still made sure to worship together many times during a week. My grandparents and parents generation had small changes but were by and large still carrying on the traditions of the previous generations. It wasn’t until my generation (Baby Boomers) that we started to see the tables turn from Christ followers who were living their life centered around worship and we started to see Christians fitting in their worship around their busy life.

I remember in my younger days that no school or organization would dare have any activity on a Wednesday night or Sunday. Many in the business world would even close their doors on Sunday as this was a day of worship for many. Slowly the culture started to shift and the church bought it hook, line and sinker. For the next two to three generations families that identified as Christian became more and more occupied by life and career. Wednesday night services started to shrink as school sporting events took first place.  Sunday night services started to fade and for the most part died.

Today according to the latest statistics, to be considered a very active churchgoer requires only one service a week.  Sadly, based on Barna’s most recent data, almost four in 10 (38%) Americans are active churchgoers. (once a week)  Christians today are still working hard but what has changed is priorities.

Societies definition of success has become how many sport activities you can enroll your children in, along with dance classes, gymnastics and we can’t forget the birthday parties that have become huge community events. By the end of the week grandparents, parents and the kids are so worn out that to even make church on Sunday morning for two hours takes a good dose of guilt and shame.

Children today do not even know how to be a kid any longer after an itinerary designed to keep them busy from morning until bedtime. Parents are so tired from working and running the kids everywhere that to even sit down for fifteen minutes to read the bible is a chore. Bible literacy is at an all time low and 51% of Christians don’t know what the great commission is.  So is it any wonder that God has to somehow poke his head in our busy lives and announce, “my people are not ready?”

I do believe the scriptures tell us that these things must happen as the return of Christ draws near. In Revelations we read that the true bride of Christ is making herself ready to meet her groom. Even in the midst of a worldly church there will be a remnant that will seek first the Kingdom of God, be good stewards of their finances and instead of spending money on worldly pleasures and societies demands, will settle for nothing less than the simple contentment of devotion to Christ.

In 1968 a nameless 90 year old Norwegian woman was given a word from the Lord to the Church of Jesus Christ. Again, it seems, the Lord is relentless in trying to warn us from falling into lukewarm Christianity.
“A lukewarmness without parallel will take hold of the Christians, a falling away from true, living Christianity. Christians will not be open for penetrating preaching. They will not, like in earlier times, want to hear of sin and grace, law and gospel, repentance and restoration. There will come a substitute instead: prosperity (happiness) Christianity.
“The important thing will be to have success, to be something; to have material things, things that God never promised us in this way. Churches and prayer houses will be emptier and emptier. Instead of the preaching we have been used to for generations—like, to take your cross up and follow Jesus—entertainment, art and culture will invade the churches where there should have been gatherings for repentance and revival. This will increase markedly just before the return of Jesus.”