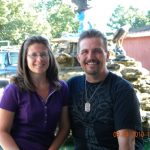 Freedom Seekers was established in January of 2005.  I remember going to visit my Mom back in 2007 and she showed me a rare write up in the Springfield paper about a new ministry that was happening south of Branson called Freedom Seekers. I phoned them that next week and spoke with a man that today I can call my good friend, Ron Hutchins. I went down not long afterwards and visited his home for men and met his wife Kim. I immediately knew that Ron and Kim were the real deal. They were humble and hungry for God. They were raw and passionate about Jesus and I knew that God could use this couple for his glory.

I have watched Ron and Kim endure some very difficult times, hardships that for some would have discouraged them out of ministry. They never lost their passion for the lost and wayward sons and daughters of the world. If they were knocked down, they trusted God with what they had and used it for his glory. They gladly submit to authority and wise counsel. They are humble and never blow their own horn for the sake of financial gain or reputation.

They now minister to over 500 people every week. In addition to their ministry in Taney County jail, they are ministering in Carroll County jail where they provide recovery, spiritual, and community re-entry support. They have witnessed thousands of decisions for Jesus Christ over the years.

In 2006 they opened their first Freedom Seekers Restoration Center in Blue Eye, Missouri. They used Restoration Centers for worship services, individual counseling, Celebrate Recovery meetings, community outreach and much more. In 2007 they opened their first transitional living home, The Freedom House, in Lampe, Missouri. The Freedom House was primarily for men coming out of the Department of Corrections and men in our area in need of recovery.

In 2013, they joined Harvest Assembly, in Oak Grove, Arkansas, under the leadership of Senior Pastors Todd and Karin Rogers. Harvest Assembly has welcomed and supported us and they are blessed to be a part of a dynamic and growing church.

I now consider Ron and Kim my dear friends and humble servants of Christ Jesus. I know the Father is pleased, Jesus is made famous and many hearts have turned to God through their tireless labor. I would recommend to anyone to pray and give your financial support.