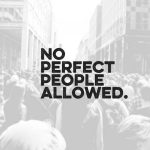 I wanted to do a quick devotion. I was reading in Matthew chapter 10 where we see Jesus calling 12 men which were his disciples to himself and gave them authority over unclean spirits, to cast them out, and to heal every disease and every affliction. They were to go to the lost sheep of the house of Israel. And proclaim as you go, saying, ‘The kingdom of heaven is at hand.’

We then see names of these 12 men that Jesus was sending on a short mission trip.

There was Peter, who was an enthusiastic, strong-willed, impulsive man, and, at times, brash. Peter had several failings in his life, including denying he even knew Jesus when Jesus was arrested.

There was Andrew always in the shadow of his older brother Peter. There was James the brother of John who both had character flaws like being brash, bragging who’d be the greatest, wanting to call down fire on people and asking to sit on a throne next to Jesus.

We can’t forget Philip was a bit plain, cautious, and was slow at realizing that Jesus was the Son of the living God. He was the one that Jesus asked, “where are we going to buy bread to feed all the people that were following Jesus.

Bartholomew hung out close with Philip and he too needed a little more convincing about Jesus as the son of God.

Thomas lived over 3 years with Jesus and still needed convincing that Jesus rose for the dead. Thus, the term, doubting Thomas.

Matthew the Tax collector, well, we all know what people thought of him.

Then there was James the son of Alphaeus, who some scholars tell us was a very quiet man that was always in the background.

There was Thaddeus, who was not afraid to interrupt Jesus. When Jesus appeared to his disciples after the resurrection, Thaddeus asked Jesus, “Lord, why are you going to reveal yourself only to us and not to the world at large?

The last two were Simon the Zealot, he is called “Simon the Zealot” because, when Jesus called him, he was a member of the Zealots’ political movement. The Zealots were a party zealous for Jewish independence and throwing off Roman rule.

Finally, last but not least, was Judas Iscariot, who was also very zealous in his beliefs and when Jesus didn’t fulfill his beliefs, he tried to take the matter in his own hands, which he ended up betraying Jesus. We know that Judas was probably a Zealot by his surname, Iscariot. Researchers believe is was a part of what they called “dagger-men,” a group of ultra-Zealots who carried a knife with them at all times to be prepared to assassinate traitors. So why doesn’t God use perfect people? Because there never were any.

God calls people with all kinds of various imperfections to come and learn from him, to become his follower, his disciple. As the Apostle Paul who in his previous life was a chief persecutor of Jesus said, one thing I do: forgetting what lies behind and straining forward to what lies ahead, I press on toward the goal for the prize of the upward call of God in Christ Jesus.